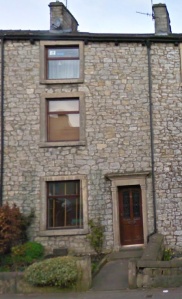 This is an updated post with revised information. I had previously thought that 102 Whalley Road was originally known as 26 Russell Street. However new information has come to light confirming that it was actually 28 Russell Street. So the information about the census returns has been corrected.

This is a photograph of 102 Whalley Road, Clitheroe, Lancashire.  It was the home of my granddad and nannie – Fred and Florrie Musgrove.  Although they lived in other houses in Clitheroe this is the only one I ever knew.

The house always seemed to have a warm and cozy feel.  I remember my granddad sitting in his armchair next to the coal fire.  My mother recalls the front bedroom on the first floor also having a fireplace and coal fire but doesn’t think any of the other bedrooms had fireplaces.

Whenever I think of Fred and Florrie I remember them at 102 Whalley Road.  However the original address was 28 Russell Street – the name changed sometime in the 1930’s.

The house was built probably early 19th century.  The block of numbers from 90-110 are now Grade II listed buildings – they were listed in September 1976.  The listing text on the British Listed Buildings website comments briefly on number 102 – the doorway to No. 102 has plain pilasters, cornice and entablature.

Looking back at the census returns I can see who lived at 28 Russell Street:-

These houses are now probably close on 200 years old and will no doubt be standing for many more years.