Cecil was born in Leeds, West Yorkshire on 17 August 1901. He was the second of five children.

In the 1911 census Cecil, his parents and his siblings are living at 58 Shaftsbury Avenue, Roundhay, Leeds.

Twelve years later Cecil found himself in trouble for dangerous driving. The following story is from the Yorkshire Evening Post of 5 April 1923 (image from http://www.britishnewspaperarchive.co.uk). 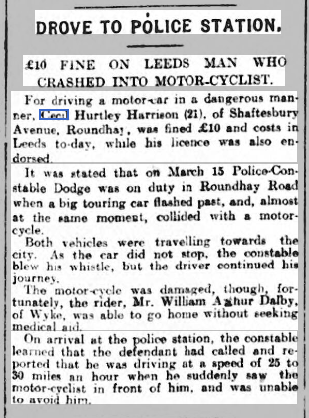 £10 FINE ON LEEDS MAN WHO CRASHED INTO MOTOR-CYCLIST

For driving a motor-car in a dangerous manner, Cecil Hurtley Harrison (21), of Shaftsbury Avenue, Roundhay, was fined £10 and costs in Leeds today, while his licence was also endorsed.
It was stated that on March 15 Police Constable Dodge was on duty in Roundhay Road when a big touring car flashed past, and, almost at the same moment, collided with a motor-cycle.
Both vehicles were travelling towards the city. As the car did not stop, the constable blew his whistle, but the driver continued his journey.
The motor-cycle was damaged, though, fortunately, the rider, Mr. William Arthur Dalby, of Wyke, was able to go home without seeking medical aid.
On arrival at the police station, the constable learned that the defendant had called and reported that he was driving at a speed of 25 to 30 miles an hour when he suddenly saw the motor-cyclist in front of him, and was unable to avoid him.

I guess that Cecil perhaps panicked and then realised the consequences of not stopping. I am glad that he at least had the good sense to go to the police station and report the accident.