Walter Croad is my 3rd cousin 1x removed. His parents are Norman Croad and Mary Booth. Our common ancestors are Martin Gawthrop and Ann Kighley, my 3x great grandparents.

Walter married Margaret Woodward on 20 December 1947. Below is a report of the wedding from the Barnoldswick & Earby Times of 24 December 1947. 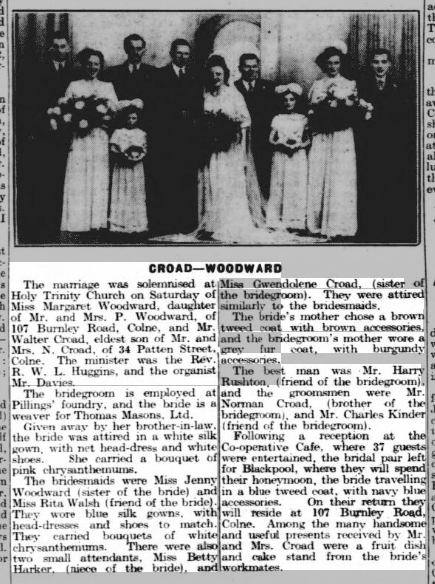 The marriage was solemnised at Holy Trinity Church on Saturday of Miss Margaret Woodward, daughter of Mr and Mrs P Woodward, of 107 Burnley Road, Colne, and Mr Walter Croad, eldest son of Mr and Mrs N Croad, of 34 Patten Street, Colne. The minister was the Rev R W L Huggins, and the organist Mr Davies.

The bridegroom is employed at Pillings’ foundry, and the bride is a weaver for Thomas Masons Ltd.

Given away by her brother-in-law, the bride was attired in a white silk gown, with net head-dress and white shoes. She carried a bouquet of pink chrysanthemums.

The bride’s mother chose a brown tweed coat with brown accessories, and the bridegroom’s mother wore a grey coat, with burgundy accessories.

Following a reception at the Co-operative Cafe, where 37 guests were entertained, the bridal pair left for Blackpool, where they will spend their honeymoon, the bride travelling in a blue tweed coat, with navy blue accessories. On their return they will reside at 107 Burnley Road, Colne. Among the many handsome and useful presents received by Mr and Mrs Croad were a fruit dish and cake stand from the bride’s workmates.