We all have ancestors who have served in the military. Military Monday is a place to post their images, stories and records of their service in various branches of the military.

Thomas Baldwin is my 1st cousin 2x removed. He was born sometime in the September quarter of 1888 in Eastburn, near Keighley to parents Francis Baldwin and Ellen Dawson. Our common ancestors are John Dawson and Ellen Gawthrop, my 2x great grandparents.

Thomas is a cousin of my grandfather, Joseph Dawson and also of Prince Dawson who died in WW1 on 21 December 1915.

In the 1901 census at the age of 12 Thomas was working as a spinner at a local worsted mill. Ten years later the 1911 census describes his occupation as a warp dresser.

Unfortunately there are no surviving military records for Thomas on either Ancestry or Find My Past so I can’t find out very much information about his service.

I know that he served in the 2nd Battalion / 4th Division of Duke of Wellingtons (West Riding Regiment) holding the rank of Private and his service number was 267218.

Thomas died of wounds on 4 May 1917 while serving in France & Flanders. It is highly likely that he was wounded during the Battle of Arras.  According to information on the excellent website Craven’s Part in The Great War news of his death wasn’t given to his mother until August 1917.

From the same source it seems that Thomas was a prominent player in the Eastburn Cricket Club’s first eleven.

Thomas is buried in Douai Communal Cemetery in France. 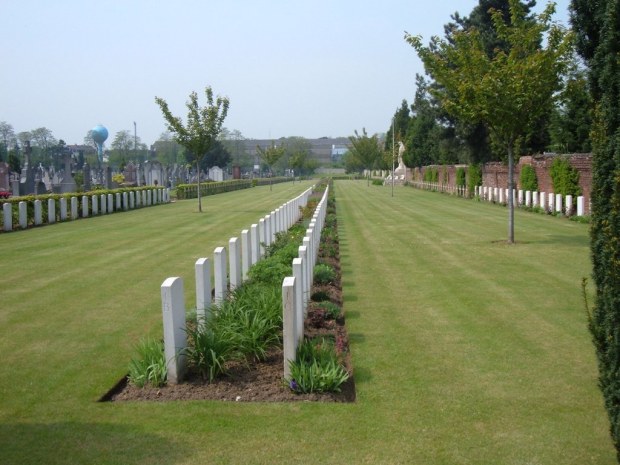 The following information is from the Commonwealth War Graves Commission website.

Douai was occupied by French troops and the Royal Naval Air Service on the 22nd September, 1914, and captured by the Germans on the 1st October; it remained in enemy hands until the 17th October, 1918. The 42nd Casualty Clearing Station was posted in the town from the 28th October, 1918, to the 25th November, 1919.

Douai Communal Cemetery was used during the occupation years of 1914-18 by the Germans for prisoners of war and British, French, Russian, Rumanian and Italian soldiers, as well as German soldiers were buried in it.

During the 1939-45 War Douai was in British hands until the German break through in May, 1940. The 1st Corps Headquarters were at Cuincy, on the western edge of the town, from October, 1939 onwards and Douai was one of the towns from which the Allied advance into Belgium was launched early in May, 1940, only to be followed by the collapse of the French and Belgian units and the consequent withdrawal of the British element towards Dunkirk.

Arthur is the brother of Prince Dawson and John Dawson – his parents are John Dawson and Elizabeth Bradley. He was born 18 July 1879 and lived at Steeton with Eastburn about three miles from Keighley, West Yorkshire.

Before I found his WW1 service records I knew that Arthur married Lily Cockshott sometime in Q2 1906 and their marriage is recorded in the Keighley registration district. They had one child – a son, Eric born in 1909.

Arthur enlisted on 30 August 1916 in Keighley and was assigned to 7th West Yorkshire Regiment. His service number is 238029. He was 37 years old. At the time of his conscription he was living at 19 School Street, Steeton with Eastburn. His trade is given as ‘mason’.

The enlistment documents also show that Arthur had previous service in the Royal Engineers.

His service papers provided confirmation of the date of marriage to Lily – 10 April 1906. They also give Eric’s date of birth as 21 October 1909 – so more information for my tree. However his service record through up a bit of surprise. There is another son shown – Alan with a date of birth of 3 March 1911. 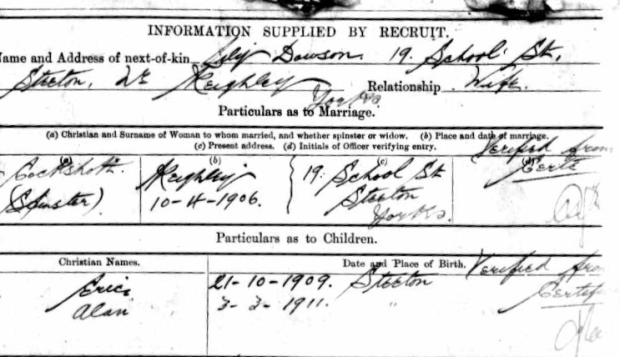 I have the 1911 census record for Arthur, Lily and Eric – but no Alan.

I have been able to find a birth for Alan Dawson at the right time and in the right location but no trace of him in the 1911 census. So, I searched for a death and found a record for Alan Dawson who died in Leeds in 1977 with a date of birth given as 3 April 1911.

Could this be the answer to my conundrum?  Maybe 3 March 1911 was incorrect. The 1911 census was undertaken on the night of 2 April 1911. So Alan could have been born the following day and that is why he is not recorded. I’m happy with this solution and have now added Alan to my family tree.

Anyway, back to Arthur and his war service.

It seems that Arthur was at home until 3 January 1917. The following day he embarked for France, returning home again after 105 days on 18 April 1917. There is reference to him serving in the Royal Defence Corps (RDC) – the role of this regiment was to provide security and guard duties inside the United Kingdom.

Arthur was finally discharged on 23 March 1919. 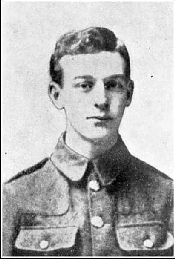 Prince Dawson is my 1st cousin 2x removed – in other words he is my granddad’s cousin.  He was born sometime in the third quarter of 1893 in Keighley, West Yorkshire, to parents John Dawson and Elizabeth Bradley.

I have found Prince, his parents and siblings on the 1901 census and in 1911 when he is working as an iron plainer.

Fortunately for me Ancestry.co.uk has a copy of Prince’s WW1 service records and they are in pretty good condition so I can work out quite a lot of information about him.

I know that he enlisted for four years in Keighley on 28th September 1914 about eight weeks after Britain declared war on Germany on 4th August.

According to the medical report Prince was not a very tall chap – in fact he was only 5 feet 4 inches.  He had normal vision and good physical development.

His first posting was to the 2/6th Battalion of The Duke of Wellington’s (West Riding Regiment) – part of the Territorial Force.  His regimental number was 2757.  The 2/6th was formed at Skipton in September 1914 as a home service (“second line”) unit.

On Christmas Day 1914 he was transferred to the 1/6th Battalion The Duke of Wellington’s (West Riding Regiment).

Prince remained billeted in Doncaster until April 1915.  I can’t even begin to imagine what it must have been like for Prince and all the other troops waiting to be shipped to France.

Anyway the day eventually came and he embarked from Southampton on 13th April 1915 and landed at Le Havre on 14th April 1915.  The 1/6th then became the 147th Brigade of the 49th (West Riding) Division.

By the 19th April the Division had concentrated in the area of Estaires – Merville – Neuf Berquin.  They remained in France and Flanders and took part in The Battle of Aubers Ridge (9th May 1915) and the defence against the first Phosgene attack (19th December 1915).

I can see from Prince’s medical record that he was admitted to the field hospital on 25th June 1915 with diarrhea.  He rejoined his unit the following day.

The next available information shows that Prince was wounded in action with gas poisoning on 19th December 1915 – the first day of the Phosgene attack mentioned above.  He was admitted to hospital at Paris-Plage but died at 5.50pm on 21st December 1915.

The following extract is from the book “Craven’s Part in The Great War” by John T Clayton (editor of the Craven Herald, Skipton). 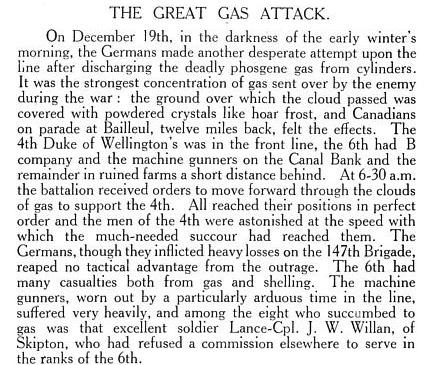 On the 22nd December 1915 a telegraph was received at the Territorial Force Records Office in York notifying them of Prince’s death with instructions to “inform relatives”.  I don’t know when the knock on the door came or when the family telegraph arrived but you can bet it was a lousy Christmas in the Dawson house that year.

Just over two month’s later on the 1st March 1916 the War Office at St. James’s Park, London wrote to the Territorial Force Records Office asking them to despatch any of Prince’s personal property in their possession to Mr John Dawson at 42 High Street, Steeton, Keighley.

The next document is dated 7th March 1916 and is a signed acknowledgement from John for Prince’s effects which included a badge, belt, cig case, knife (pocket), letters, 2 pencils, photos and wallet. 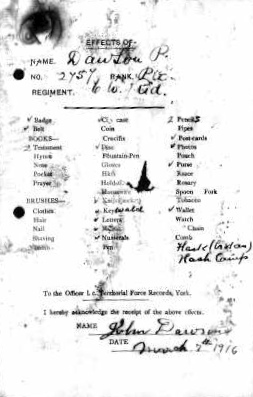 I felt really sad when I came across that document and was left wondering how John and Elizabeth must have felt.

Prince served for 1 year and 85 days and didn’t come home.  This same story can be told for many, many thousands of military casualties from the UK and around the World.

Prince is buried at Le Touqet-Paris Plage Communal Cemetery in Plot II. A. 35. 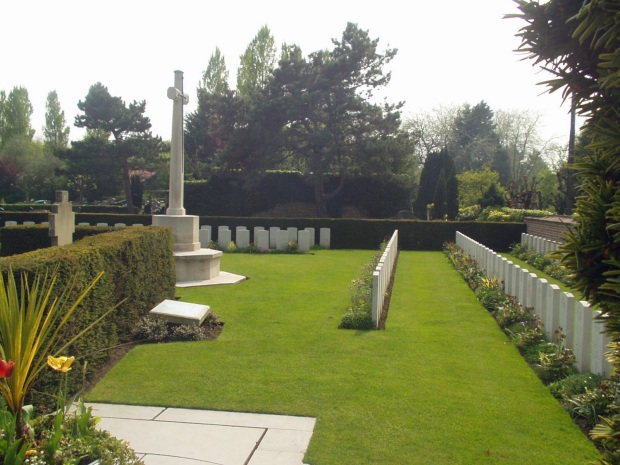 The Duchess of Westminister’s Hospital (No.1 B.R.C.S) was at Le Touquet from October 1914, to July 1918, and the British graves in the Communal Cemetery were made from that hospital.  The Communal Cemetery contains a number of French and Italian military graves, and two British Plots in the corner.  A wooden obelisk in memory of the British dead was erected in the cemetery by the Lifeboat men of the commune.  There are now 142 Commonwealth burials of the 1914-1918 war here.  All of whom died in the period November 1914, to April 1916.

I very much doubt that John and Elizabeth had the opportunity to visit Prince’s grave.  So I make a promise now that I will go and pay my respects for them.