To participate in Sunday’s Obituary, post obituaries along with other information about that person.

Margaret was born in 1871 – her birth is registered in the September quarter in Burnley, Lancashire.

On the 16 May 1891 Margaret married John Gerrey at Holy Trinity church, Habergham Eaves near Burnley. The witnesses at the marriage were Margaret’s sister and brother in law, Mary and Richard Brotherton. John Gerrey was from Cornwall and by 1911, together with their daughter May, the family had moved over 350 miles to live in St Austell, Cornwall.

I haven’t been able to find any information about the daughter May – she appears in the 1911 census but as yet I haven’t found a birth record or a marriage or a death record.

Just recently I came across the following obituary notice for Margaret in the Burnley Express of 19 September 1931. 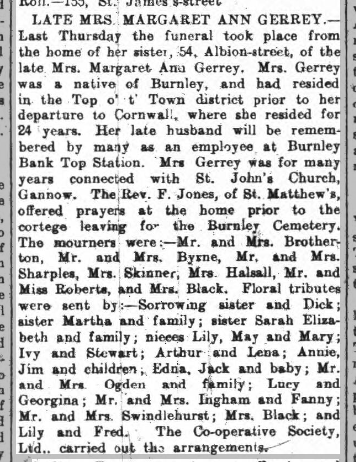 LATE MRS MARGARET ANN GERREY – Last Thursday the funeral took place from the home of her sister, 54 Albion Street, of the late Mrs Margaret Ann Gerrey. Mrs Gerrey was a native of Burnley, and had resided in the Top o’ t’ Town district prior to her departure to Cornwall, where she resided for 24 years. Her late husband will be remembered by many as an employee at Burnley Bank Top Station. Mrs Gerrey was for many years connected with St John’s Church, Gannow. The Rev F Jones, of St Matthew’s, offered prayers at the home prior to the cortege leaving for the Burnley Cemetery. The mourners were:- Mr and Mrs Brotherton, Mr and Mrs Byrne, Mr and Mrs Sharples, Mrs Skinner, Mrs Halsall, Mr and Miss Roberts, and Mrs Black. Floral tributes were sent by:- Sorrowing sister and Dick; sister Martha and family; nieces Lily, May and Mary; Ivy and Stewart; Arthur and Lena; Annie, Jim and children; Edna, Jack and baby; Mr and Mrs Ogden and family; Lucy and Georgina; Mr and Mrs Ingham and Fanny; Mr and Mrs Swindlehurst; Mrs Black; and Lily and Fred. The Co-operative Society, Ltd carried out the arrangements.