I recently found the following newspaper article in the Hendon and Finchley Times dated 19 August 1898.

A CHILD SCALDED TO DEATH

Mr Walter Schroder, deputy coroner, held an inquiry at the District Council Offices, Hendon, on Thursday, concerning the death of Eleanor Gawthrop, a child of between two or three years of age, living at 5, Murray Road, Mill Hill. Mr F Smith was chosen foreman of the jury. Emily Gawthrop, mother of the deceased, deposed that on Sunday, the 14th inst., the child was in her usual health and was playing with the baby on the floor. That was about ten minutes past twelve. There was a saucepan of stew on the fire, and witness was engaged in her domestic duties. She heard a crash and on turning round she saw deceased lying on the floor and the saucepan was upset. Her father picked deceased up. She found deceased much scalded, and immediately called her neighbour, Mrs Low, and sent for Dr Martin, who attended the child till its death. Questioned by the coroner witness said there was no guard in front of the fire, but there was a good sized fender, although it was not very high. Benjamin Gawthrop, father of the deceased, said he was at home on Sunday last, and the children were playing on the floor. The deceased left the baby and ran across the room to him. She stumbled near the fire place and catching the saucepan handle with her arm, upset the content over herself. He picked her up and the doctor was sent for. The deceased’s life was not insured. Dr Henry Martin, of Mill Hill, stated that he was called at about one p.m. on Sunday. He went to Murray Road and there saw deceased. He found her well nourished and strong. Two thirds of the back, the right arm, and part of the chest had been badly scalded. Deceased was quite sensible, and was suffering from the effects of the scald. He looked upon it as a serious cases, and the child died on Monday, about 30 hours after the occurrence. Previous to his arrival at the house the parents had done all in their power to alleviate the pain, and they gave him practically the same account of the accident as given that morning. Mrs Rose Amelia Low, the wife of a labourer living in the same house as the Gawthrop’s, said she was called on Sunday, and found deceased badly scalded. She covered the child with flour, and afterwards saturated her with linseed oil, which she obtained from a neighbour. She believed the parents were both very careful with the children. The jury returned a verdict of “Accidental Death.”

In addition to Eleanor Jane they had Alice Harriet, Jack and Nellie.

Nellie died shortly after birth in 1904.

Benjamin survived for another 17 years before his death at the age of 57 in 1928.

Jack Gawthrop is my 3rd cousin 2x removed. His parents are Benjamin Gawthrop and Emily Ann Thurlow. Our common ancestors are John Gawthrop and Sarah Brown, my 4x great grandparents.

Jack was born about 1899 – his birth is registered at Hendon, Middlesex in the March quarter of that year.

Unfortunately I haven’t been able to find any remaining records of Jack’s military service either on http://www.ancestry.co.uk or http://www.findmypast.co.uk. I did find some details on http://www.forces-war-records.co.uk and on the Commonwealth War Graves Commission website, http://www.cwgc.org.

I know that Jack served as a Private in the 2nd Battalion of the Prince of Wales’s Own West Yorkshire Regiment. His service number was 52976.

Jack died of wounds on 2 April 1918 serving in France and Flanders and he is buried at Abbeville Communal Cemetery Extension.

For much of the First World War, Abbeville was headquarters of the Commonwealth lines of communication and No.3 BRCS, No.5 and No.2 Stationary Hospitals were stationed there variously from October 1914 to January 1920. The communal cemetery was used for burials from November 1914 to September 1916, the earliest being made among the French military graves. The extension was begun in September 1916.

During the early part of the Second World War, Abbeville was a major operational aerodrome, but the town fell to the Germans at the end of May 1940. On 4 June, an attempt was made by the 51st Division, in conjunction with the French, to break the German bridgehead, but without success. Towards the end of 1943, eight large ski shaped buildings appeared near Abbeville. These proved to be storage units for flying bomb components and they were heavily bombed by Commonwealth air forces. Abbeville was retaken on 4 September 1944 by Canadian and Polish units.

The Commonwealth sections of both cemetery and extension were designed by Sir Reginald Blomfield. 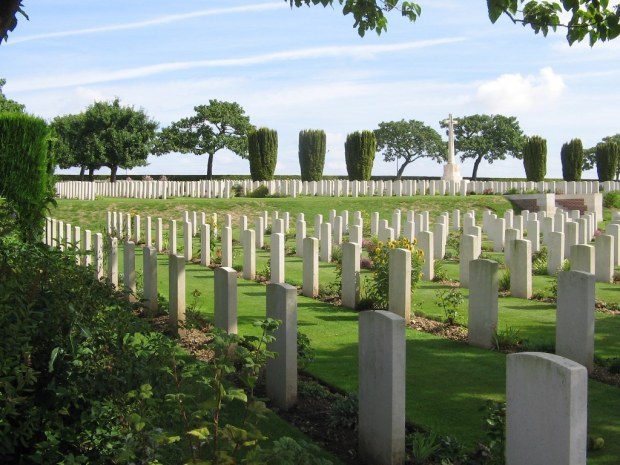