Here is a postcard of Kendal Parish Church in Westmorland. 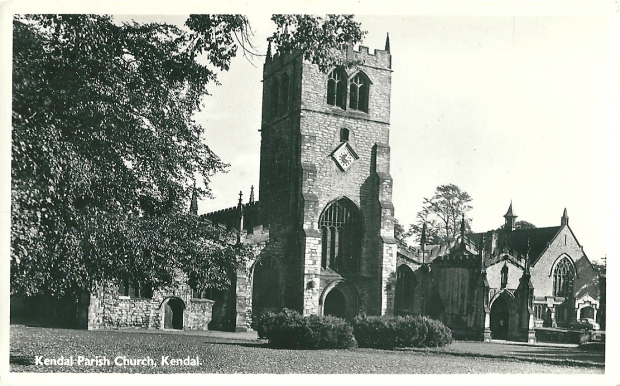 This is a real photograph published by Lilywhite Ltd. of Brighouse, West Yorkshire.  The postcard is unused and is in very good condition.

Kendal is a very important location in my family history.  It is the home of many ancestors on my nannie, Florrie Musgrove’s side of the family.  I can trace my Musgrove, Carradice, Turner, Rooking and a few other relatives to Kendal and the surrounding area.

Over the years my ancestors moved away from Westmorland and made the journey south to Lancashire and particularly Clitheroe.

Here is another postcard from my collection.  This time it’s the Church of the Epiphany and cross in the village of Austwick in the heart of the Yorkshire Dales.

The postcard is unused and is in very good condition.  There is no publisher and no printer identified on the front or the back of the card.

It looks like a really quiet rural scene.  However it is much different today with a two lane main road running alongside the church.

My interest and connection with Austwick is through some of my Paley ancestors who were born in the village.

As far as I can tell the church dates back to the 1800’s.  The building is said to have been a former lecture hall and was consecrated in 1841.

The building is an English Heritage Building and is Grade II listed.

Austwick has it’s own Parish Council and the website has lots of information about the area including a link to some fabulous Dales Walks.

Here is another postcard from my collection of Yorkshire churches.  This one is of St. Michael the Archangel at Kirkby Malham.

The postcard is unused and is published by the Skipton Stationery Co.  It is in pretty good condition.  There is a small crease in the bottom left hand corner but apart from that there are no other blemishes.

This ancient church is sometimes referred to as the Cathedral of the Dales.

The placename Kirk-by (church place) is from old Danish and it is reasonable to assume that the Danes found an old church here when they overran the North of England.  The church therefore probably dates from around the 9th or 10th centuries.

The Domesday Book (1086) however describes the area as wasteland, indicating that the church and settlement were probably left in ruins after the recent Norman invasion.

King John confirmed the gift of the Church and glebe land by Adam of Giggleswick, to the Abbey of St. Mary, West Dereham, Norfolk in a Charter dated 1199 and this Order supplied the Parish with it’s clergy until the Reformation.

The present building is large and imposing as it towers over the small village of Kirkby Malham.  The major part of the structure is built in millstone grit and dates from about 1490, but some features of earlier construction were incorporated and many further embellishments have been added over the centuries.

The church is dedicated to Saint Michael the Archangel, the earliest evidence of this being a will of 1275.  However by the 19th century there seems to have been some confusion over the dedication and many guide books and even the Ordnance Survey of that period refer to it as St James’.

This particular church is of interest to me because I have several ancestors who were born in Kirkby Malhamdale and were either baptised or married in the church.

This is a postcard of St. Peter’s church at Markby in Lincolnshire.  The church has no family significance at all – I just really like it so I bought the postcard.

The postcard is unused and is part of the “celesque series” published by The Photochrom Co Ltd.

St. Peter’s is one of the few remaining thatched churches in the UK and the only one in Lincolnshire.  Here is an article from The Telegraph written in August 2007 about “The surprise of thatched churches”.

Markby village is situated 3½ miles from Alford and consists of about two dozen properties. The church stands on the site of an old Augustinian Priory, and in fact is partly built of stone rescued from the priory ruins.

After the founding of the priory in 1160, the local people were encouraged by the Canons to use the Priory Church.  On the Dissolution of the Monasteries by Henry VIII they obtained permission, first to use a comer of the old priory and then in 1611 to build the present church.  In the first instance the roof was tiled, but in 1672 Richard White, churchwarden, substituted a thatch, taking the tiles as payment.

By the late 19th Century St. Peter’s was in a sorry state and incapable of being used regularly so a new corrugated iron church, “Christ Church”, was erected near by – the old church being retained for funerals and the occasional wedding.  However by 1962 this “tin church” was rusting and irreparable so it was decided to renovate old St. Peter’s.

Today the interior of the church still bears traces of its history – the Norman dog-toothed decoration on the chancel arch, the former oak cross beam rescued from the roof bearing a date of 1611, together with the ancient font from the old parish church, the 13th Century rose sculpture and the 19th Century box pews.  More photo’s here.

The thatched roof was replaced in 2008.

This is a postcard of St. Oswald’s Church at Arncliffe, North Yorkshire. 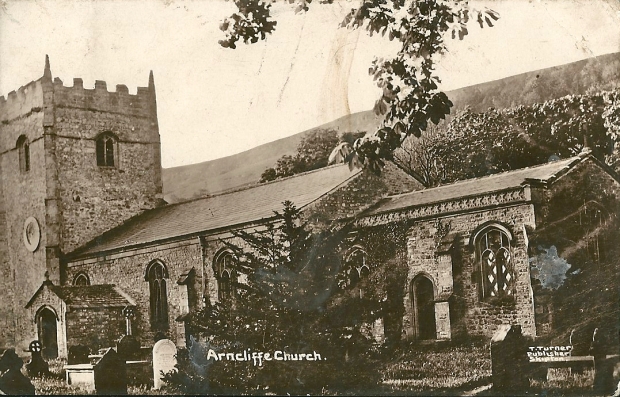 The postcard is used and has a bit of wear and tear.  You can see the creases at the top right corner where it has been bent.  There is also some damage to the image – you can see this on the right end wall of the church.  Finally there is some staining down the middle of the image.  But apart from all that it’s perfect!

The card was published by T Turner of Skipton.

Unfortunately the stamp has been torn from the card and this has made the postmark impossible to read.  It looks like it is dated 17 July.  It was posted in Arncliffe to Private D Holland at the Military Hospital in Frensham, Surrey.  I suspect that Private Holland was there sometime during the First World War.

My interest in Arncliffe is because my 2x great grandmother, Hannah Dinsdale, was born there as were her siblings and two or three other people in my tree.  From what I have been able to establish Hannah was christened at St. Oswald’s church.

The first stone church here at Arncliffe was built in the 12th century.  In about 1500 the old church was pulled down and a new one was built, this time with a tower.

Then in 1796 everything except the tower was pulled down.  A new chancel was built on the site of the 16th century one, and the roof was opened up to show the timbers.

St. Oswald’s stands in a beautiful spot beside the River Skirfare.  I haven’t visited the church yet but it is on my list of things to do.

This is a postcard scene of Cowling in West Yorkshire.  The postcard is unused and is in good condition.  It is part of a series published by F. Frith & Co. Ltd of Reigate.

The location is on the outskirts of the village on the main road to Colne, in Lancashire.

The building on the right is the Black Bull public house.  This has sadly closed down and the building is now used as a pine and oak furniture shop.

In the far distance at the top of the postcard you can just make out Cowling Pinnacle.

The photograph below was taken on a recent visit to Cowling.  I couldn’t quite get in to  the same spot in the field where the postcard scene appears to have been taken from.  I am standing somewhere on the edge of the main so couldn’t quite get the same panoramic view.

This postcard is a street scene in the town of Silsden, West Yorkshire.  The postcard has been used but is in very good condition.  It was posted from Silsden in March 1929 to a Miss Exley at Waterloo Road, Kelbrook, Colne.

There is no publisher details on the back of the card but there is the name “Jackson” on the front.  Although I am not certain I believe this could be J M Jackson & Co. Ltd.

The reason I bought the postcard is because Silsden is the birth place of my paternal grandmother Alice Hurtley.

Silsden is a town and civil parish in West Yorkshire located in the Aire river valley between Keighley and Skipton.  Along the lower edge of the town is the Leeds and Liverpool Canal.

I like the scene – it reminds me of a sleepy sunny day with not much going on, except for the two chaps on the right who appear to be working hard.  The horse and cart is standing outside the Red Lion hotel on Kirkgate.