Ada Welsh is my 2nd cousin 3x removed. Her parents were Patrick Welsh (or sometimes Walsh) and Charlotte Stowell. Our common ancestors were John Stowell and Ann Riddeoff, my 4x great grandparents.

Ada was born on 11 April 1867 and her birth was registered in Burnley, Lancashire. As far as I have been able to establish she was the first of at least seven children.

On the 25 September 1886, at the age of 19, Ada married James Bowes at Holy Trinity church, Habergham Eaves, Lancashire.

James and Ada had eleven children over the next twenty one years.

In the census returns of 1891 and 1911 Ada’s occupation is given as “cotton winder”. And in the 1939 Register she is described as doing “unpaid domestic duties”. 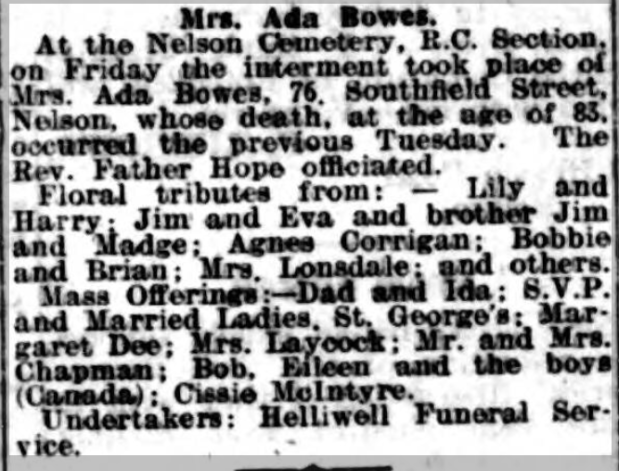 At the Nelson Cemetery, RC Section, on Friday the interment took place of Mrs Ada Bowes, 76, Southfield Street, Nelson, whose death, at the age of 83, occurred the previous Tuesday. The Rev. Father Hope officiated.

Floral tributes from:- Lily and Harry; Jim and Eva and brother Jim and Madge; Agnes Corrigan; Bobbie and Brian; Mrs Lonsdale; and others.