Eleanor Musgrove is my 2nd great grand aunt. She is the daughter of my 3x great grandparents William Musgrove and Harriot Francis.

Eleanor was born in 1838 and baptised on 2 July that year in Kendal, Westmorland. She married Edward Hopkinson in 1855.

From what I have been able to establish so far from newspaper archives Eleanor was often up to “no good”.

My blog post HERE reports her being sent to the House of Correction for three months in February 1861 for stealing.

The article below from the Westmorland Gazette of 7 October 1865 suggests that a spell in “chokey” didn’t teach Eleanor any lessons. 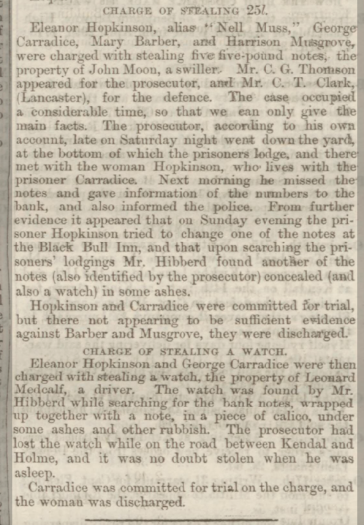 Eleanor Hopkinson, alias “Nell Muss”, George Carradice, Mary Barber, and Harrison Musgrove, were charged with stealing five five-pound notes, the property of John Moon, a swiller. Mr C G Thompson appeared for the prosecutor, and Mr C T Clark, (Lancaster), for the defence. The case occupied a considerable time, so that we can only give the main facts. The prosecutor, according to his own account, late on Saturday night went down the yard, at the bottom of which the prisoners lodge, and there met with the woman Hopkinson, who lives with the prisoner Carradice. Next morning he missed the notes and gave information of the numbers to the bank, and also informed the police. From further evidence it appeared that on Sunday evening the prisoner Hopkinson tried to change one of the notes at the Black Bull Inn, and that upon searching the prisoners’ lodgings Mr Hibberd found another of the notes (also identified by the prosecutor) concealed (and also a watch) in some ashes.

Hopkinson and Carradice were committed for trial, but there not appearing to be sufficient evidence against Barber and Musgrove, they were discharged.

CHARGE OF STEALING A WATCH

Eleanor Hopkinson and George Carradice were then charged with stealing a watch, the property of Leonard Medcalf, a driver. The watch was found by Mr Hibbered while searching for the bank notes, wrapped up together with a note, in a piece of calico, under some ashes and other rubbish. The prosecutor had lost the watch while on the road between Kendal and Holme, and it was no doubt stolen when he was asleep.

Carradice was committed for trial on the charge, and the woman was discharged.

Next Sunday remember to come back for the result of the trial of Eleanor and George!!

Regular readers of my blog will know that Harrison Musgrove (brother of Eleanor) mentioned in the first case in the article is also one of my ancestors – it makes a nice change to see him not charged with an offence this time!!  You can read more about him in the Black Sheep Sunday category of my blog.

Carradice is also one of my ancestral names from this time in Kendal. However I do not have a George Carradice in my family tree at the moment, but I suppose there is still time for me to identify yet another felon in my history!!