Harriot Musgrove is my 3x great grandmother.  She was born Harriot Francis in Kendal, Westmorland sometime around 1795.  Harriot married William Musgrove on 30 October 1815 in Kendal.

Harriot has been one of the census “missing person” mysteries I’ve been trying clear up.  I have found her on the 1841 and 1851 census returns together with her husband William.  However on the 1861 census William is on his own.

I know that Harriot died in 1866 so she must be there somewhere – right?

Anyway I got my breakthrough this week.

As I was trawling through the newspaper archives on Find My Past I discovered the following article in the Kendal Mercury of 9 February 1861. 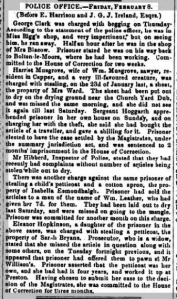 Harriet Musgrove, wife of Wm. Musgrove, sawyer, resident in Capper, and a very ill-favoured creature, was charged with stealing, on the 23d of January last, a sheet, the property of Mrs Ward.  The sheet had been put out to dry on the drying ground near the Church Yard Dub, and was missed the same morning, and she did not see it again till last Saturday.  Sergeant Hoggarth apprehended prisoner in her own house on Sunday, and on charging her with the theft, she said she had bought the article of a traveller, and gave a shilling for it.  Prisoner elected to have the case settled by the Magistrates, under the summary jurisdiction act, and was sentenced to 2 months’ imprisonment in the House of Correction.

Mr Hibberd, Inspector of Police, stated that they had recently had complaints without number of articles being stolen while out to dry.

There was another charge against the same prisoner of stealing a child’s petticoat and a cotton apron, the property of Isabella Esmondhalgh.  Prisoner had sold the articles to a man of the name of Wm. Leather, who had given her 7d. for them.  They had been laid out to dry last Saturday, and were missed on going to the mangle.  Prisoner was committed for another month on this charge.

Eleanor Hopkinson, a daughter of the prisoner in the above cases, was charged with stealing a petticoat, the property of Sarah Bryans.  Prosecutor, who is a widow, stated that she missed the article in question along with some others, on the Tuesday fortnight previous, and it appeared that prisoner had offered then to pawn at Mr Willison’s.  Prisoner asserted that the petticoat was her own, and she had had it four years, and worked it up at Preston.  Having chosen to submit her case to the decision of the Magistrates, she was committed to the House of Correction for three months.

So there it is – in the 1861 census, which was taken on 7 April, Harriot must still be in the House of Correction in Kendal along with her daughter Eleanor Hopkinson.

There were 14 enumeration districts in the Kendal 1861 census.  I searched them in number order and there it was in the next to last district – the House of Correction.  All the prisoners were just identified by initials – but there they are on consecutive lines – HM and EH – Harriot Musgrove and Eleanor Hopkinson. 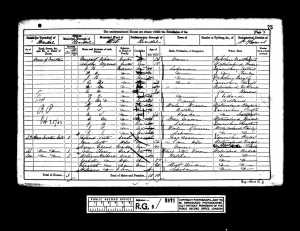